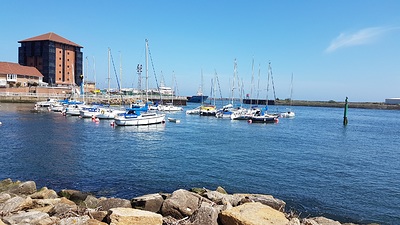 The Club own and maintain 46 moorings in the North Dock Basin for the exclusive use of Sunderland Yacht Club. Full Members who own sailing cruiser or cruiser racing boats. These moorings are only available during the summer sailing season which runs from April to October. In the winter period the moorings must be vacated to allow for maintenance. The starting price of our moorings is £130 for the summer season.

The management of this facility is carried out by the 'Moorings Committee'. The committee manages all aspects of the moorings from allocations and maintenance to development and planning of the facility including the organising of the Club lifts.

Allocations are carried out on a strict and overt points basis. Points are collated by the combination of personal club membership and duration of boat ownership.

Moorings are not transferable under any circumstances. Mooring holders must also endeavour to inform the secretary of the committee if they intend to vacate their mooring for more than two weeks.

Additional berthing facilities are available from the nearby Sunderland Marina, which includes both deep water chain moorings and pontoon berths. The club maintains a close working relationship with the Sunderland Marina.

A complete set of "Mooring Management Procedures and User Rules" are issued to every mooring holder and are available by following this link. It is the responsibility of all owner/berth holders to understand and observe these rules. Moorings holders are required to complete and return the "Mooring Holders Declaration".

Upon allocation of a mooring, occupancy may only be taken up after settlement of mooring fees. Debtors to the Club in any form will not be allowed occupancy of moorings unless approved by a separate arrangement with the General Committee.

Limited lay-up facilities are available in the Club compound. In the event of demand being in excess of accommodation the points system is again employed.

A 'Club Lift' is organised at the beginning and end of the lay-up period, which runs over the winter from October to April. Crane costs are divided equally between all boats requiring lifting.

As an alternative to using the Club Lift, members with smaller boats with trailers can use the Club crane. The Club crane has a capacity of 2 Tonnes. An annual charge is made for the use of this facility.

Harbour dues are payable to the Port of Sunderland Authority. These are collected by the Moorings Committee thus achieving a discount on behalf of SYC members.

Link to our membership page Click Here will also take you to a Moorings Application Form. The Membership fees and charges detail the costs of moorings and ancillary charges.